Low-cost operations in the EU (among the most competitive taxes and salaries) INVEST LT+ program designed to cover the expenses of FDIs (up to EUR 3.5 million support) Corporate profit tax reductions for new technologies and R&D 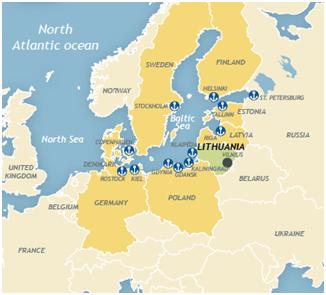 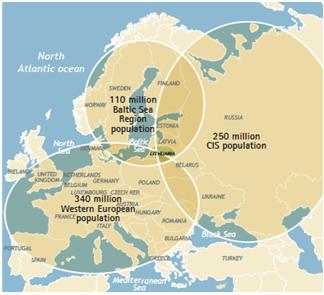 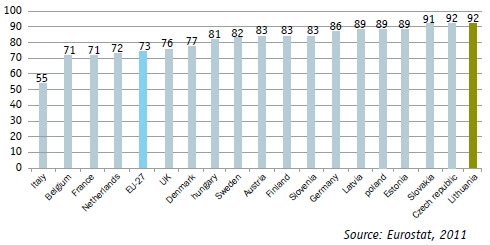 30 percent of the Lithuanian population hold higher education degrees, compared to the EU average of 24 percent. And even 40 percent of the 25 - 34 years old have higher education, which is almost twice as high as the EU-15 average. In 2010-2011, there were about 134,000 students enrolled at Lithuania’s 22 universities, and more than 53,000 in 23 colleges. During 2000-2010 more than 366,000 Lithuanians graduated colleges and universities, out of whom more than 278,500 obtained their degrees in universities and almost 86,000 in colleges. Lithuania has one of the EU’s most educated populations and continues to possess a pool of well educated professionals for local and international businesses. Lithuanians are a multi-lingual nation, which makes Lithuanian employees even more attractive. According to the Europeans and Languages survey, 90 percent of Lithuanians are able to participate in a conversation in other language than their mother tongue. The EU-25 average is only 50 percent. 50 percent of the population speaks in two foreign languages. Figures provided by Eurostat show that 90 percent of Lithuanians are able to speak Russian, almost 40 percent speak English, and around 20 percent are able to lead a discussion in the German language.

Why You Should Have Choose BizBon.com Business Immigration Consultants?

It doesn't matter which European country you have chosen for emigration. After you officially immigrate and get permit to live in any country of the European Union you can live and work abroad in any country where you found better conditions of life, job opportunities or conditions for running business.

In 1940's the standard of living in Lithuania was higher than in Finland.

1. Client sends us required details to initiate the process to [email protected] After we sign a contract, client pays 50% prepayment.

2. Within a week Performer prepares necessary documents and sends them to the Clients email. Client prints documents as per instructions and sends us back signed by a fast post courier.

4. After we will receive documents, within 7-30 days we will prepare all remaining documents (Company and TRP documents – full package)

3. Within a week Performer prepares necessary documents and sends them to the Clients email. Client prints documents as per instructions and sends us back signed by a fast post courier.

6. After Client receives the documents, makes an appointment in the nearest embassy, submits there his documents. And pays document submission fee there.

7. Embassy sends your documents to Migration Department, and decision will be made by this institution.

8. After positive decision is made, Client has to apply for a National Type D visa and not later than in 1 month he has to come to Europe to take his Residence Permit.

9. Client immediately comes to Europe, goes to Migration Department to apply for a residency card.